The police station in Cahul renovated with the U.S. and UNDP support

The police station no. 1 from Cahul has become more accessible and friendly, after being renovated according to the best community policing practices. The total support, provided by the U.S. Government through the "Support to law enforcement reform in Moldova" Project, implemented by UNDP, amounts to US$138,000.

The station, with an area of 200 square meters, serves about 30 thousand people. After the renovation, the building was equipped with furniture and high-performing equipment. In addition, the employees were trained to implement the community policing concept. The training programme included such topics as: criminology and crime prevention, tools and methods used in community policing, methods of identifying and solving community security problems, etc.

“A modern and comfortable office for employees gives police officers better working conditions and enables better quality services to citizens, who in turn feel that they can confidently discuss and interact with the police. This is not only a change of facade, but also of approach and attitude. The sector is the beginning, the people are the continuation,” said Serghei Diaconu, State Secretary, Ministry of Internal Affairs.

The police station has a universal design, being accessible to all beneficiaries, including people with disabilities. There is also an interviewing room and a multipurpose meeting room, used for various community activities, such as citizen information meetings. A playground for children was set up in the immediate vicinity of the police station.

Each of the 20 police officers (16 men and 4 women), who serve at the police station has individual workspace and benefit from other facilities: fitted kitchen, locker room. The building has a modern boiler room and bathrooms that are accessible for wheelchairs users.

“This renovated and re-imagined police station will offer a modern and more user-friendly environment in which to strengthen the connection between the police officers and the community they serve.  Greater accessibility to law enforcement strengthens the relationship between the community and police, increases trust, and engenders cooperation that reduces crime and allows the police to be more responsive to the needs of the community,” said Katrina Fotovat, Senior Official in the Office of Global Women’s Issues, U.S. Department of State.

At the same time, a lineup room, and a witness room, protected by a one-way mirror, were arranged inside the Cahul Police Inspectorate, to allow the identification of suspects in safe and confidential conditions, for instance, in cases of domestic violence, trafficking in human beings or other violent crimes. If necessary, the witness room can be used as an interviewing room. Both spaces have been also renovated with the support of the U.S. Government.

“The transformation of this police station is a clear illustration of the national and international partners’ commitment to modernize the policing activity for the benefit of men and women of Moldova. We believe that by transforming the space, we help embedding a new culture, of mutual engagement, trust and pride among police officers and citizens,” said Dima Al-Khatib, UNDP Resident Representative to the Republic of Moldova.

Previously, two other police stations across the country were reorganized and modernized with UNDP and U.S. support - no. 3 from the Buiucani sector of Chisinau municipality (2017) and no. 1 from Singerei (2018). Another modernized police station will be inaugurated soon in Egorovca village, Falesti district.

The Ministry of Internal Affairs and the Police of the Republic of Moldova have a long-lasting collaboration with the U.S. Government and UNDP, during which various activities were carried out to strengthen institutional and professional capacities of police to ensure a safe environment for all men and women in the Republic of Moldova and increase people’s trust in police. 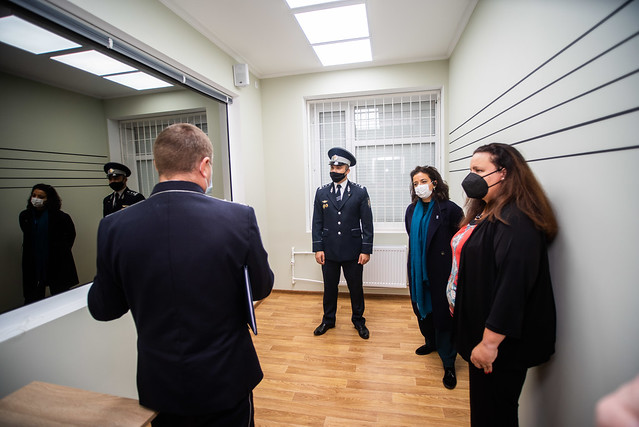