An anticorruption lesson by rapper Kapushon for school students

The rapper Kapushon, accompanied by young anticorruption volunteers and staff of the National Anticorruption Center, will conduct an information campaign during November – December 2019 in several schools and universities of Moldova. The students and pupils will watch the video clip the song “If you gave, if you took”, signed by Kapushon – the song was launched on 25 October. The young people will discuss with anticorruption officers and find out how to act when somebody gives or asks for a bribe. The campaign will be conducted with support from UNDP.

Ion Pruteanu, Head of Division at the National Anticorruption Center (NAC), mentioned today during a press conference that NAC and UNDP aim to raising people’s awareness: “Our aim is to inform the young people about the risks and serious consequences of corruption. We do not want to highlight some areas and show that they are more corrupted than others. The music video scenario is based on some human stories, which may occur when people forget to act with integrity,” said Ion Pruteanu.

Kapushon emphasized that the idea of the song came several years ago, when he attended several anticorruption trainings organized by NAC officers. “Most of the reactions of my fans to this song were positive. From my own experience I know that social products usually do not have a big impact. My audience is predominantly young and expecting fun songs or soul songs. They catch the best. But in the case of this musical project, the positive impact exceeded our expectations. The success is due to both the song and the video,” said the singer.

According to Olga Crivoliubic, UNDP Project Manager, public persons’ involvement is very important for preventing corruption and promoting integrity: “When an artist gets involved, any social campaign has higher chances of success. We aim to reach out to a higher number of young people – the pro-integrity generation.”

The communication campaign will reach out to the educational institutions that host the anticorruption volunteers – cities of Chisinau, Orhei, Balti, and Soroca.

The song “If you gave, if you took”, signed by the rapper Kapushon, is a musical manifesto against corruption. One of the protagonists of this social video is a driver guilty of a road accident, leading to severe injuries caused to a person. Another character is a student, who is part of a corruption scheme through which exam grades are purchased. Anticorruption volunteers participated in shooting the music video. During the first 24 hours since its launch, the video registered tens of thousands views on social media networks.

This initiative is part of the “Curbing corruption by building sustainable integrity in the republic of Moldova” project, implemented by UNDP in partnership with the National Anticorruption Center, with the support of the Norwegian Ministry of Foreign Affairs. 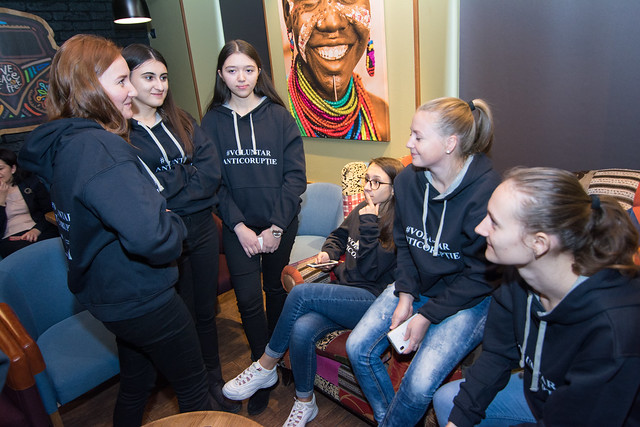