Music Connecting People continues to sing for people on left bank of the Nistru river. The young musicians reached out Dubasari

Supported by the European Union, the Moldovan National Youth Orchestra has created unforgettable moments with musical background for hundreds of people from the left side of the Nistru river, through four innovative activities.

On October 2, the Music Connecting People team reached the textile factory Intercentre Lux from Dubasari and organized a flash mob. Silence covered suddenly the factory halls, which usually were rather noisy, and the sewing machines’ rattle was replaced by the sounds of four musical instruments played by the young artists from MNYO, who appeared unexpectedly interpreting “Eine kleine Nachtmusik” by Mozart.

Another flash mob followed later at the Buket Moldavii wine production from Dubasari. By the end of the working day, the Moldovan National Youth Orchestra quartet has brought additional energy for all the employees who gathered in the factory’s garden to enjoy a memorable experience.

Afterwards, a guitar concert that was played within the premises of the music school “Gh. Murgu” from Dubasari has diversified the program of the Music Connecting People tour. Alexandr Mironov, a virtuoso guitarist, played a solo recital for all those present and disclosed some of his secrets to the students and those fond of playing guitar, who came to meet him.

An open-air concert started at 17:30 in the square in front of the school. The instrumentalists from the Moldovan National Youth Orchestra - Ionut Ciocanu (violin), Petrica Bivol (violin), Vladislav Secichin (viol) and Dmitrii Iurcik – have given rhythm to all songs, which was deeply felt by the public. Those over 20 songs have inspired the young pupils of the musical school and encouraged communication among audience.

The city of Dubasari was the fourth destination of the Music Connecting People team. Previously, the musicians played concerts in Tirnauca and Carmanova villages, as well as in Ribnita town. The next concerts will follow in Camenca town and Rascov village.

Music Connecting People is a project financed by the European Union through the EU Confidence Building Measures Programme, implemented by UNDP Moldova. During September 2019 – June 2020, the orchestra will play 10 chamber music concerts and conduct many outstanding activities in the MNYO style, out of which nine will be provided on the left side of the River Nistru. The total route of the musical trip will be around 2,500 km so as to get closer the two sides of the Nistru river. 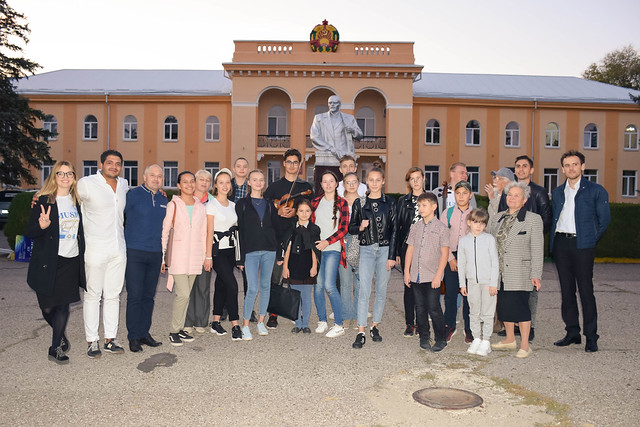