People from suburban area of Bender, are able to go to a Family Physician Center built in Hagimus, with the EU’s support

A Family Physician Center, open in Hagimus, district of Causeni,  benefits to locals and also to other inhabitants of the south suburban area of Bender, covering amongst others the villages: of Gisca, Merenesti and Chitcani.

European Union has allocated 123,550 Euro for this project, in the framework of the EU “Confidence Building Measures” Programme, implemented by UNDP. The local community has contributed with more than 23,000 euro.

“Close to people and for people, this is what we as EU focuses on when it comes to support to communities. This modern family physician center will receive patients from the surroundings wherever they come from the left or from the right banks. We are pleased that our support will improve people quality of living in an inclusive matter.” says Fabien Schaeffer, project manager at the EU Delegation.

The Family Physician Center has physiotherapy rooms with adapted furniture and modern medical equipment. It is situated in a facility with autonomous heating, water system and sewerage. The old Center was located in a damaged building.

“We couldn’t rebuild it because its foundation was affected by underground waters. Even though we were carrying out repairment works yearly, its rooms were full of dampness, parget was falling off the walls and the wind was blowing through the old windows. Bad operating conditions were not the only problem of the Center. Most of the medical equipment was old or obsolete,” says the mayor of Hagimus, Anatol Iepure.

“It is better now. We have good working conditions. We can perform medical check-ups without the fear the patients might catch a cold during the winter, as it was in the old building,” says nurse Elena Medvedeva.

In eight months since the opening of the new facility, 3500 people have registered with the new Family Physician Center, including 600 people from the left bank of Nistru.

The Family Physician Center in Hagimus is one of the more than 80 infrastructure objectives refurbished in the framework of the European Union’s Programme “Confidence Building Measures”. The Program contributes to build confidence among the inhabitants from both banks of the Nistru river by involving them in joint projects. 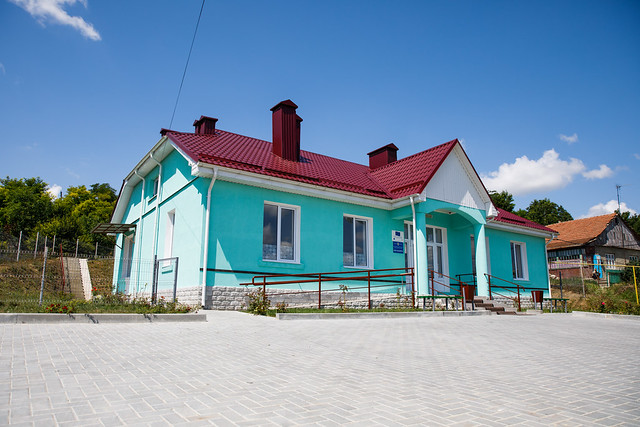