The education system should grow a corruption-free generation, while pupils, students and parents should give up for good the informal payments, bribery and favouritism. This is one of the messages conveyed by the anti-corruption volunteers in a flash-mob promoting integrity in education, organised today in Chisinau. Volunteers held up banners with anti-corruption messages: “In the new school year – no corruption!”, “School must grow a corruption-free generation!”, “No corruption in schools and universities!”, “Be free, say NO to corruption” etc.

They informed citizens about what is corruption, what are the sanctions for giving and taking bribes and where can they call if asked for bribes etc. At the same time, young people distributed to pupils and students a leaflet entitled “Corruption understandable to all”. The activity took place with the support of the Project “Curbing Corruption by Building Sustainable Integrity in the Republic of Moldova”, implemented by UNDP in partnership with the National Anticorruption Centre.

One of the flash mob participants, Eduard Groza, student at “Vasile Lupu” college in Orhei, he wants to contribute to reducing the size of the corruption phenomenon. The young man urges students and pupils to rely only on honest methods when pursuing high grades on tests or exams. “It is important for each of us to become an example for others, to rely exclusively on the work and knowledge that they accumulate in the education process. We also want universities and high schools to talk more about corruption prevention. Only in this way we can educate a generation with integrity,” says the young man.

Another participant, Anastasia Bărbuță, says that illegal phenomena in education can be reduced by a more active involvement of young people. “If each one of us will point out to irregularities they witness and will not accept in any way to offer a bribe, we would have a better chance of putting an end to corruption,” says the young woman.

According to Olga Crivoliubic, UNDP project manager, young people play an important role in corruption prevention. “Anti-corruption volunteers can pass on the information from peer to peer, and this is one of the most efficient ways of information. During the current year, UNDP has supported several awareness events for young people about the corruption phenomenon and activities promoting integrity, and such actions will be organized in future, too.”

Ion Pruteanu, head of directorate at the National Anticorruption Centre, mentioned that NAC has created an intervention cell that examines cases of informal payments collection in the education system and in the first week of the current school year alone 22 complaints from parents have been registered.

The National Anticorruption Centre formed the group of anti-corruption volunteers in April of the current year. Supported by UNDP, the 20 young men and women took part in several activities promoting integrity in education, by which they aim to combat informal payments, favouritism, cheating - practices that generate corruption in education.

The flash-mob promoting integrity in education will be organized in the coming weeks in other cities of the country, too, including Orhei and Balti.

The “Curbing corruption by building sustainable integrity in the Republic of Moldova” project is implemented by UNDP in partnership with the National Anticorruption Centre and the Office of the People’s Advocate, with the support of the Norwegian Ministry of Foreign Affairs. The project will run from 2019 to 2021 and will strengthen the capacity of the public and private sector actors, as well as those of the civil society organizations, for the implementation of effective corruption prevention tools and standards. 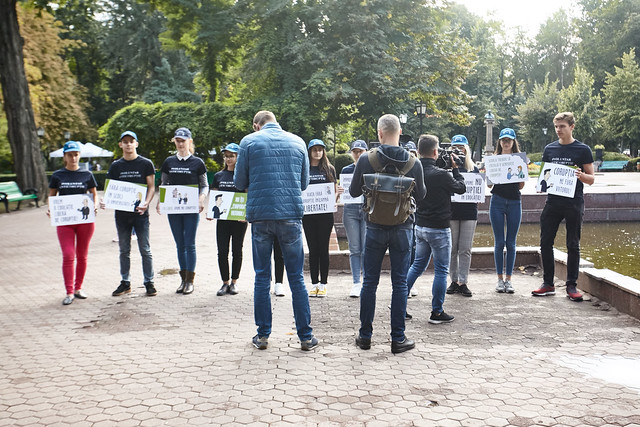