World No Alcohol Day Campaign: “You risk losing your family if you consume excessively alcohol and use violence”

Ten shops and bars from the Gagauzian Autonomy have joined their efforts to contribute to reducing excessive use of alcohol and implicitly of gender-based violence. On the World No Alcohol Day, the shops have distributed to clients leaflets and displayed posters with the following messages “Alcohol use may destroy your family” and “Happy families do not abuse alcohol”. In some shops, sellers have recommended to clients to buy useful things instead of alcoholic drinks. This initiative is carried out under the umbrella of “Addressing violence against women in the Republic of Moldova: exploring and learning from local solutions ”, implemented by UNDP.

There are over 30 bars and shops in Chirsova village from ATU Gagauzia, compactly populated by Gagauzians and Bulgarians. The majority of them sell alcohol drinks.

Ana Tiufecci is 26 years old and for two years she has been owner of a grocery shop on the central street from Chirsova. The young lady is among the first supporters of this campaign. On World No Alcohol Day she has offered the clients dozens of leaflets and suggested to buy some other things to those who wanted to buy alcohol.

“It is important for people to use moderate quantities of alcohol, so as not to induce risks for family health and wellbeing. When I see that somebody is already drunk, I refuse selling him/her alcohol. Many of them get upset, but they have to accept the refuse,” states the young woman.

Vasilisa Delicostea, social assistant in Chirsova, notes that the majority of families witnessing gender-based violence episodes also face the problem of alcohol abuse. “We really welcome this initiative and we hope that it will be a step towards changing population’s perception. Men and women consuming alcohol excessively usually generate violence. Beatings and insults are rather frequent in such families. Giving up abusive use of alcohol is the first step towards saving a family, which is on the edge of being destroyed”, states the specialist.

“The aim of this event is to inform the citizens about the risks of alcoholism, as well as the consequences if this phenomenon for the person, family and society as a whole,” mentioned Vitalie Frecăuţeanu, Project Coordinator at UNDP Moldova.

Reducing gender-based violence is one of the goals of a UNDP project conducted in Chirsova since 2018. Alongside prevention aspects and increasing awareness about violence risks, this initiative supports creating an assistance service for survivors of violence in the region. Hence, women will be able to benefit from psychological counselling, social and legal assistance. At the same time, they will be helped to find a job and to ensure a decent earning for themselves.

It is for the first time for Gagauzia region when a multidisciplinary team addressing gender-based violence was created and operates. The team includes police officers, social assistants, teachers, and the mayor. The group of specialists is trained to act in all cases of violence. At the same time, the team also deals with preventing violence, by communicating with community members, from pupils to adults, promoting zero tolerance for gender-based violence.

The above-mentioned raising awareness activities on World No Alcohol Day was conducted in Comrat, Ceadir-Lunga, as well as in a number of shops and bars in Chirsova village, one of the biggest rural localities in ATU Gagauzia.

“Addressing violence against women in the Republic of Moldova: exploring and learning from local solutions” project implemented by UNDP during 2018-2020 with the support of Republic of Korea.

This pilot programme in Moldova is part of UNDP’s global project entitled “Ending Gender-based Violence and Achieving the Sustainable Development Goals”, which aims to take violence prevention to scale by bringing new partners, strategies and sources of financing to the table. The project is implemented in the following seven countries: Bhutan, Lebanon, Indonesia, Iraq, Moldova, Peru and Uganda. UNDP and the Republic of Korea launched this global initiative to overcome the imbalance between the size of the problem and the resources dedicated to its solution. 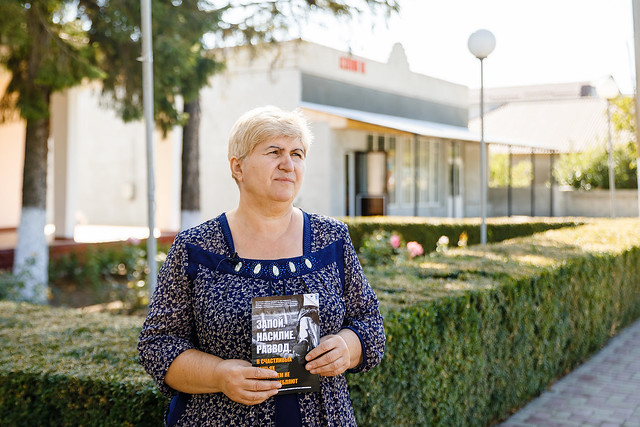