On 24 October 2019, the United Nations Development Programme (UNDP) presented to the public an optional course, educating about climate and environmental friendly lifestyles, the "Climate Box". The education program was developed by the UNDP with the financial support of the Russian Federation Government, the Coca-Cola Foundation and the Global Environment Facility (GEF).

In the Republic of Moldova, in partnership with the National Environment Centre, 174 teachers from 155 schools, along with 3100 pupils, have tested the education materials from the Climate Box. The content had been adapted to the national context, translated and published to be optionally used at classes of geography, biology, physics, science and ecological education.

“The Climate Box toolkit equips the new generation, with necessary knowledge on climate action and impacts, modelling their behaviour and eventually contributing to a sustainable future with a well-informed generation," said Dima Al-Khatib, UNDP Resident Representative in Moldova.

The Climate Box has been developed for pupils aged 7 to 16 years old. The curriculum is flexible, containing group activities, projects and experiments, as well as materials, which pupils can individually use. This gives both teachers, as well as the youth, the possibility to take control over climate change education, interactively engaging them in the addressed topics and combining learning with fun.

“The Climate Box is an instrument for ecological education, a drop in a complex process. Issues such as pollution and human influence on environment should be acknowledged. Thus, the attitude towards other species and the environment changes. Education for sustainable development should be a compulsory subject, so that we grow people which, in their day to day life, take responsible decisions in relation to the environment", noted Iuliana Cantaragiu, State Secretary, Ministry of Agriculture, Regional Development, and Environment.

The trained teachers shall use the Climate Box during classes, and the pupils shall know better climate change issues and have an appropriate behavior. The National Environment Center plans to train more teachers. So far, 200 copies of the publication have been printed and distributed.

"Environmental education must be a cross-cutting subject, because it covers many aspects of life and is a complex problem. We aim to integrate environmental and climate change aspects into several subjects and to focus on practical aspects,” said Iurie Cristea, Chief of Cabinet at the Ministry of Education, Culture and Research.

Tatiana Manastirli, 17, a student from Copceac village, is one of the participants in the Regional Climate Camp organized by the "Climate Box" project in Kazakhstan, which brought together students from eight countries who stood out through practical climate projects in their schools and communities. She says that there she had put forward an initiative to reduce plastic consumption: "Green education can become more interesting, handier, that's why mobile phone apps should be created, contests, raffles should be organized. Only in such a way will pupils understand that climate change is a reality and we need to adapt, denying what is happening is not a solution, neither is the destruction of the environment."

Climate Box encyclopedia was written by experts in climatology, geography, biology and economics, that have cooperated with professors and children literature writers. Today it is used by about 50,000 pupils from eight countries from Eastern Europe and Central Asia. “Climate Box” is accessible online as an app for mobile phone, available in Russian.

The "Climate Box" project contributes to Actions for Climate Empowerment (ACE) - a framework approved by the UN Climate Change Framework Convention (UNCCC). The actions derived from the recognition of the fact that in order to achieve the targets of the Paris Agreement, the countries must strengthen their education about climate change, public awareness and participation.

Education comprises an integral part of climate leadership, and Climate Box is working to make climate change education more relevant, equitable, and inclusive for all youth.

The Republic of Moldova is vulnerable to climate change, with average yearly losses of 2.13 of the GDP. Drought, waves of heat, frosts, severe storms or floods are phenomena which the Republic of Moldova feels too for already a number of years. Abundant snow precipitations of 22 April 2017, which have led to massive destruction of trees in the Centre and South of Moldova, when the nature was in the process of spring vegetation, as well as to various material losses and extended disconnection from electricity, generated discussions in the public area about how prepared the country is to cope with climate change. 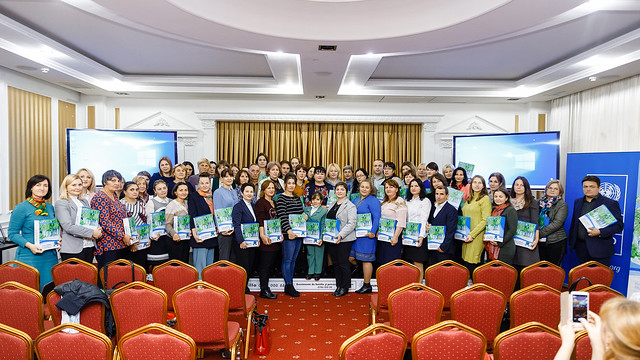