The first tourist complex with Gagauzian specific from Republic of Moldova was launched on 6 November 2018 in Congaz village, Comrat district. Besides four traditional peasants’ houses with walls made of clay and roofs made of reed, the ethno-tourist complex “Gagauz Sofrasi” hosts a museum, cellar, national style restaurant with terrace, as well as a mini-hotel and an events’ hall.

“Tourism is a high potential niche, which was not yet explored in our region. With the assistance provided by the European Union we succeeded to create not only a perfect place for local people and foreigners to rest, but also an innovative tourist attraction for the ATU Gagauzia. The visitors may get here the flavor of our region’s traditions and history, may enjoy the traditional Gagauzian dishes and the best wines in the area, having also the opportunity to participate in gastronomic workshops,” mentions the owner of the complex, Ana Statova. Now this complex also became a perfect working place for 14 villagers.

To develop and promote this complex, the owner benefited from mentoring and a grant of 18,500 Euro from the European Union, through the SARD Programme, implemented by UNDP.

Gintautas Baranauskas, Deputy Head of Operations, the EU Delegation to the Republic of Moldova, who attended the event, mentioned: "Environment, energy and infrastructure related projects help safeguard the health and quality of life of people. By providing support for implementation of projects in these sector, the European Union is contributing not only to better living conditions, but also to a better future for the generations to come. In addition to this, the EU is providing assistance for development of tourism, which is not a one-off activity. It requires continuous efforts of all interested parties, innovation and "outside-the box-thinking". We are happy to see that beneficiaries of EU funded projects engage such qualities in implementing successful activities."

The tourist complex and winery “Kara Gani” from Vulcanesti town had also an inauguration event on 6 November. With a grant of 18,270 Euro provided by the EU through the SARD Programme, an alternative energy system composed of 70 solar panels, inverters and electrical generators was installed. “By applying alternative energy technologies, we succeeded not only to save resources, but also to avoid power supply interruptions which were severely affecting our production and activity. For one year and a half, the alternative system has produced about 23 MWh,” mentioned the owners, Larisa and Gheorghe Cerven.

A new park, situated next to the bank of Cahul River, was inaugurated also on 6 November.  This was possible with the financial assistance of the European Union and the contribution of local and regional public authorities.

Also, the riverbed of Cahul River was rehabilitated for a segment of 3 km. Over several years, the ecological situation of river which crosses the town became a real threat for the inhabitants. Its riverbed was not cleaned for years and was totally stalled. Thus, after a heavy rain, the river would swell up and flood in all the nearby households. The mayor of Vulcanesti town, Victor Petrioglo, noted that the local budget loses annually because of floods over 2 million MDL, which represents about 15%: “Thanks to the riverbed cleaning project we solved the problem of floods, mud and infections generated by the waste dumped on the river sides."

The total cost of the project for cleaning the Cahul River and designing the park accounted for 126 thousand 942 Euro, out of which 70 thousand Euro were provided by the European Union, and the remaining amount was covered from the regional and community budgets.

Financed by the European Union with 6.5 million Euro and implemented by UNDP, the “Support for Agriculture and Rural Development in ATU Gagauzia and Taraclia District” (SARD) Programme aims to foster the collaboration between central and local authorities, as well as among regional organizations from Gagauzia and Taraclia district, so as to contribute to the social and economic development of the region, and of the Republic of Moldova in general. The SARD Programme conducts activities to empower communities, rehabilitate social infrastructure, promote inter-municipal cooperation and implement the European initiative of rural development – LEADER in ATU Gagauzia and Taraclia district. 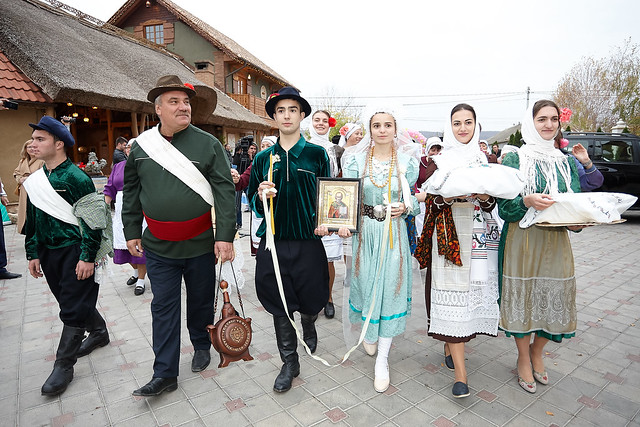