Rescue and Fire Station of Copanca was renovated with EU support

The rescuers and fire fighters of Copanca village, Causeni district will intervene more rapidly and efficiently in case of fires and emergency situations, as the station where they activate was renovated and endowed with high performant equipment. The European Union allocated 68,000 Euro through the Support to Confidence Building Measures Programme, implemented by the UNDP. Furthermore, the Town Hall premises that host the station was endowed with a biomass heating system under the EU-funded Energy and Biomass Project.

The Rescue and Fire Station of Copanca provides services to nine villages with a population of over 15,000 residents. Four of these villages – Chitcani, Cremenciug, Zahorna and Merenesti – are under de-facto administration from Tiraspol. The rescuers intervene in cases of fires, home blocked access, drowning, traffic accidents and many other emergency situations. The intervention team should be on duty 24/24 and it should reach the place of the incident in less than 15 minutes.

Until 2016, ten employees of Copanca station were working in one room in the basement of an administrative building, which was used as a meeting room, day room and kitchen. After extinguishing a fire, the rescuers could not take a shower; they had no gym facility, although they are required to be in good physical shape. Two years ago, the village’s authorities allocated several rooms for the fire and rescue station in the Town Hall building. However, the new headquarters needed capital renovations and an efficient heating system was missing. The amount necessary to solve these two issues was way out of community’s budget. With European Union assistance, the Rescue and Fire Station was renovated and properly equipped, and the Town Hall building was connected to a biomass heating system.

“Sometimes people are wondering what does EU concretely do for them and why to invest in Confidence Building Measures? The results of this project speak for itself. The EU contributes to the facilitation of the settlement of the Transnistrian conflict by increasing confidence between Chisinau and Tiraspol through supporting joint initiatives, like this renovation in Copanca. Those initiatives improve the well-being of both banks population through cooperative work. This is what EU Confidence Building Measures are about,” underlined Peter Michalko, EU Ambassador to the Republic of Moldova.

“The primary objective of the SCBM Programme is to win the “hearts and minds” of people through building bridges of confidence and trust and establishing platforms for strengthening relationships and cooperation between both banks,” mentioned Dafina Gercheva, UN Resident Coordinator and UNDP Resident Representative in the Republic of Moldova.

Now, the Rescue and Fire Station has all conditions, including a shelter room for victims, a dining room, and a gym. The station benefits from high-performant equipment. “It is beyond words to describe what we used to have and what we have now. We have special diving gear to go under water, equipment to go high or deep, and a drone to locate the point of origin of the fire. These will allow us being more efficient during missions,” said Alexandru Dutca, the Chief of Station. The Copanca Town Hall endowed the Station with an outlander pickup to quickly access the hard-to-reach destinations.

"Today we are building a bridge of trust to save lives, to increase the quality of services and to be closer to people's needs,” said Cristina Lesnic, Deputy Prime Minister for Reintegration.

The Town Hall employees and the representative of civil society whose offices are in the same building also enjoy better conditions created with EU support. “We could heat only a few rooms with convectors and electrical heaters in winter. It was cold in halls and the walls in unheated rooms risked deteriorating. Now all the 1,561 m2 are heated by secure and ecological energy produced in the Republic of Moldova,” said Afanasii Cutari, Mayor of Copanca village. The total investment in biomass heating system was 33,376.60 Euro - European funds, the community’s contribution being 16,054.59 Euro.

The Rescue and Fire Station of Copanca is one of the 80 objects of infrastructure renovated in the framework of the EU funded Support to Confidence Building Measures Programme, implemented by UNDP Moldova. The Programme aims to increase trust between people on both banks of the Nistru River by involving local leaders, businesses and civil society in common business development and improving social infrastructure projects. 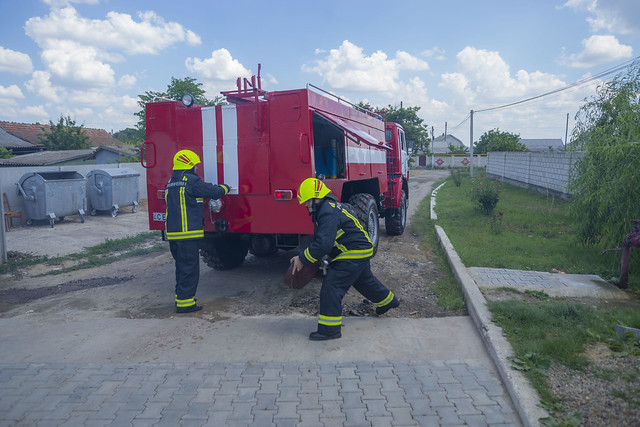