199,000 people have access to affordable and clean energy, produced in Republic of Moldova with the support of European Union

199,000 people benefit from affordable and clean energy, produced in the Republic of Moldova. This is the main effect of the Moldova Energy and Biomass Project, financed by the European Union and implemented by the United Nations Development Programme (UNDP). During 2011-2018, 265 schools, kindergartens, community facilities and hospitals switched from heating on coal and gas to biomass energy. 70 of these institutions have gained access to hot water produced by solar energy.

“Moldova Energy and Biomass Project is a success story which demonstrates once again how the support from the EU creates new opportunities and better life for citizens of the country. For more than 7 years now, the EU has been putting a lot of ‘Energy’ in the development of the biomass sector in the Republic of Moldova. Almost 200 thousand people have cleaner, cheaper and more efficient heating in their kindergartens, schools and public buildings, and more and more private households and companies are introducing these modern systems. With this project an entirely new economic sector was developed in a very short time, with new jobs created, turning Moldova from purely energy consumer into energy producer,” declares Peter Michalko, Ambassador, Head of the European Union Delegation in the Republic of Moldova.

The investments in new heating systems, of a total value over 13 million Euro, offered by the European Union, impacted the development of 186 villages and towns, beneficiaries of the project, boosting the creation of new jobs, development of new businesses and increasing local energy security.

“In 2011, renewable energy constituted 8% in the total energy mix of the country. In 2018, that figure is 14.7%. 98% of that renewable energy comes from biomass. This is a truly transformational development change that can be attributed to the project to a large extent! None of this would have been possible without the excellent partnership between the European Union, national partners and UNDP,” says Stefan Liller, Deputy Resident Representative, UNDP Moldova.

Green technologies reached also the residential area, where over 1,000 families are now heating their homes with energy from biomass thanks to the offered subsidies for the procurement of biomass boilers.

The Energy and Biomass Project has set the background for the development of the bioenergy sector in R. of Moldova, which seven years ago was at its very start. The growing number of biomass energy users has resulted in an increased number of businesses engaged in production of briquettes and pellets, these getting to the number of 70, some of them being launched through attractive leasing mechanisms, developed by the Energy and Biomass Project, on European funds. In order to ensure the quality of the biofuel produced in the country, with the help of the project, the first specialized Laboratory of the country was endowed with specialized equipment to test the quality of briquettes and pellets, and in 2016 was accredited for such services.

At legal level, was promoted the use of a reduced VAT of 8% for the whole chain value of biofuel, development and introduction of mandatory quality standards and other measures to contribute to the development of the market.

Moldova Energy and Biomass Project has stimulated Public-Private Partnerships as a mechanism of ensuring thermal energy to public institutions, where private partners is responsible for all operational works of the plants, securing the necessary biofuel and delivering the thermal agent, while the public partner pays for the volume of delivered energy, based on the provided invoice with numbers resulting from the thermal energy meters.

Causeni district is one of the districts with the most heating systems based on biomass, installed during the implementation of the Energy and Biomass Project. 11 public institutions from 8 villages and from the Causeni and Cainari towns have shifted to green energy due to the European Union’s assistance. The kindergarten from Carnatenii Noi village was the first institution in the district to be heated by energy from biomass. “Before, the heat was provided by stoves on coal or electric heaters, it was warm only in the play rooms, hallways and toilets being not heated. This is how the kindergarten got places with mold and humid. The new heating system has brought heat to all rooms of the building. The effects can be observed on the children, who are not getting sick as often as before,” notes Parascovia Antoniuc, the mayor of the village.

Energy and Biomass Project has contributed to developing the capacities of professionals within the whole value chain, conducting trainings for over 7,000 people, starting with workers with basic qualifications, assemblers, fitters and operators of boilers/plants, to managers of beneficiary institutions and leaders of sectorial associations. To ensure the sustainability of the project, a national center for training of operators of biomass heating systems was accredited.

Also, 456 schools have become part of the educational initiative on promotion of renewable energy and energy efficiency, resulting in a special course on Renewable Energy, which was studied in schools by over 25,000 pupils.

The Energy and Biomass Project carried out public communications campaigns that promoted renewable energy sources among children, youth, potential consumers, business sector. The national contest and the Gala “Moldova Eco-Energetica”, organized in close partnership with the Ministry of Economy and Infrastructure and the Energy Efficiency Agency, as well as the “Sun Dă-i Fest” festival, powered by photovoltaic panels, became brands associated with renewables sector.

So, the project had a significant and visible impact on the country’s economy, a new industry being launched from scratch, with hundreds of producers and distributors of biofuel and green technologies, as well as thousands of consumers and beneficiaries; an industry with an annual turnover of several hundreds of millions of lei – money that remain in the country and are not paid to foreign companies for imported fossil fuel.

The EU4Energy Initiative covers all EU support to improve energy supply, security and connectivity, as well as promote energy efficiency and the use of renewables in the Eastern Partnership countries: Armenia, Azerbaijan, Belarus, Georgia, the Republic of Moldova and Ukraine.

EU offers this support by financing projects and programmes that help to reform energy markets and reduce national energy dependence and consumption. Over the longer term, this makes energy supply more reliable, transparent and affordable, thus reducing the energy deficit and energy bills for both citizens and the private sector. More information on: www.EU4Energy.eu 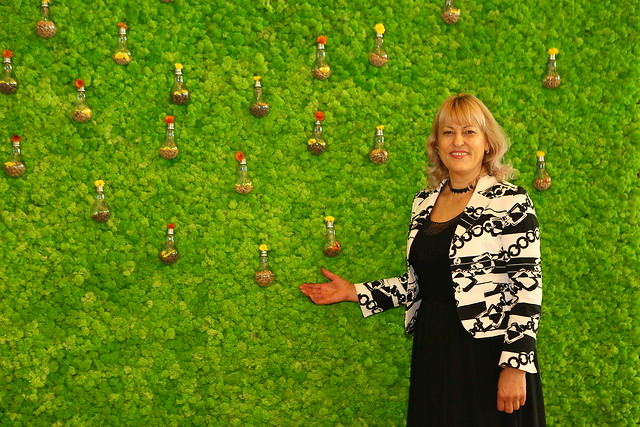